Continuing from the main page: 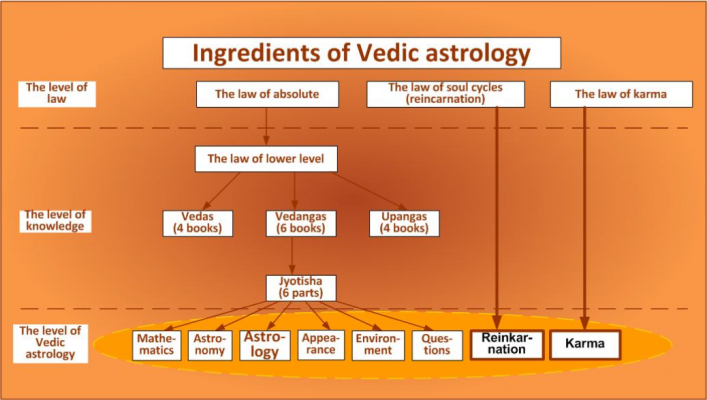 On the level of law:

On the level of knowledge: the 6 books of Vedangas

The level of Vedic astrology:

This is what Dr. Tóth-Soma László / Gaura Krisna Dásza writes about the levels of Vedic astrology in his book, ’Bevezetés a védikus irodalomba’ (Introduction to Vedic literature) (Bhaktivedanta Hittudományi Főiskola, 2009):

“The word jyoti means ‘radiant’ (according to other sources its meaning is ‘path towards light’, i.e. God), actually denoting planetary bodies. In fact, it synthesizes the science of time and it defines the length of various time units, such as that of months, days, parts of the days, etc. From a practical point of view, it regulates when to perform religious rituals or any kind of ordinary action during the days of the week. Jyotisha consists of 6 parts:

The first two of this list (ganita, jyotisha) are descriptive sciences, while the last four (jatika, samudrika, nimitta, prashna) are explanatory. This difference arises because one can find exclusively exact statements in descriptive sciences that are independent of one’s understanding, while conclusions derived from explanatory sciences are not independent of one’s understanding. Thus, in the case of the last four sciences, interpretation is always necessary.

The most well-known Jyotisha-Sastras are those processing the theme of Astronomy. Examples include Sjrya-siddhanta and Siddhanta-shiromani. Astrology is described in its fullness in Hora-Sastra, but Bhrigu-samhita is also granted high prestige.

Let us now examine the 6 differences between Vedic and Mesopotamian (Western) astrology.

Western astrology is based on the orientation of Earth compared to the Sun and it uses the tropical zodiac. Tropical zodiac is an imaginary belt divided into 12 zodiac signs that deviates about 8 ° both to the north and to the south from the ecliptic (the Sun’s apparent path on the celestial sphere during one year, or the Earth’s orbiting plane in the solar system). It supposes that every year, during the spring equinox the Sun is in Aries 0 ° and during the autumn equinox it is in Libra 0 ° (Cancer 0 ° during the summer solstice and Capricorn 0 ° during the winter solstice). Thus, the precession of equinoxes is not taken into account, which is, however, taken into consideration by Vedic astrology. In other words, looking up from Earth in reference to the fixed stars, the Sun does not return to the same place on the 21st March where it was a year earlier. Thus, the deviation in the basis of calculation between Western and Eastern (Vedic) astrology is 50 seconds of 1 ° during a year, mounting to 1 ° in 72 years, 30° in 2160 years (the backlog a whole zodiac sign!!!). A whole cycle is completed in 25920 years. The last time when the position of the planets according to the two calculations was the same occurred during 285 BC. Currently, the difference between the calculations of the two zodiacs is about 24 ° (Ayanamsha). This roughly means that 4 out of 5 people were not born in the zodiacal sign they were identified with according to Western astrology.

An example showing the differences of signs:

This approximately 23.5 ° difference is true for each other planet as well (22 calendar days).

2. What types of heavenly bodies are used?

Western and Vedic astrology both use the 12 zodiac signs, the Sun, inner planets (Moon, Mars, Mercury, Jupiter, Venus, Saturn), and outer planets (Uranus, Neptune, Pluto). Vedic astrology also uses the two nodes of the moon (they even move along the ecliptic due to the Moon rotating around the Earth). These are the North and South Nodes (Rahu and Ketu, respectively). The two nodes form the karma axis, which plays a pivotal role in the philosophy of Vedic astrology.

By discovering new planets or constellations, the principles of Western astrology are continuously changing, while those of Vedic astrology have remained unchanged for thousands of years.

Western (in other words tropical) astrology is Sun-based, mostly centered on the personality and character, so man’s nature is likened to the Sun.

Vedic (in other words cosmic or sidereal) astrology studies the interplay of fixed stars and the solar system’s planets on human life. Thus, it covers all fields of life. It pinpoints our desires, inherent talents, our abilities to assume responsibility and our capabilities for spiritual development. It is capable of forecasting the timing and interval of life’s most important events.

Vedic astrology further divides the 12 houses into additional 27 sub-houses (Nakshatras) (27 * 13° 20’ = 360°). This enables a much more precise forecast in time. There is no such possibility in Western astrology.

Western astrology uses progressions and planetary transits to time events and changes. Vedic astrology also uses these, especially planetary periods (Dashas). In Vimshottari Dasha all 9 planets (the Sun, inner planets, Rahu and Ketu) represent a time zone between 6-20 years (120 years in total). They will determine which of these exerts its effect to a person’s life at a given moment. When one’s precise birth time is known (year, month, day, hour, minute), Dasha will predict the beginning and ending of his exceptional time periods.

Paramahansa Yogananda: “Astrological stars of a person are nothing but an environment that he himself has chosen by the karmic pattern he has fashioned by his past life actions. According to this karmic pattern, he is attracted to be reborn on earth at a given time that is favourable to the fulfillment of that pattern.”

I hope, dear Reader, that your time reading this was not spent in vain. If it further aroused your interest towards Vedic astrology, then by clicking to “Contact”, you’ll find my contact details.

… and we’ll meet at chart analysis, and/or at a Vedic astrology course, and/or at astro- meditation…!

I’m looking forward to your e-mail and/or phone call.

”According to the Vedic culture, immediately after a boy’s birth astrologers should calculate what category he belongs to. Astrology can help if there is a first-class astrologer. Such an astrologer can tell what line a boy is coming from and how he should be trained.”